What Recent Break-up is More Tragic and Noteworthy Than Any Romance in Hollywood?
It is the break-up of the Federal Reserve with Wall Street. Quantitative Easing (QE) officially
ended last week. No more Fed money printed out of thin air. No more money that helped propel
the S&P up over 500% and the Nasdaq over 1100% from the March 2009 bottom. No more
artificial suppression of interest rates that kept the Fed funds rate at zero for 13 years, squashed
borrowing rates for all investors and beckoned them to take more risk in the stock market. Now,
as the Fed has officially ended its QE party, Wall Street is lamenting the end of near free money
and perhaps recalling the Hall & Oates hit song. 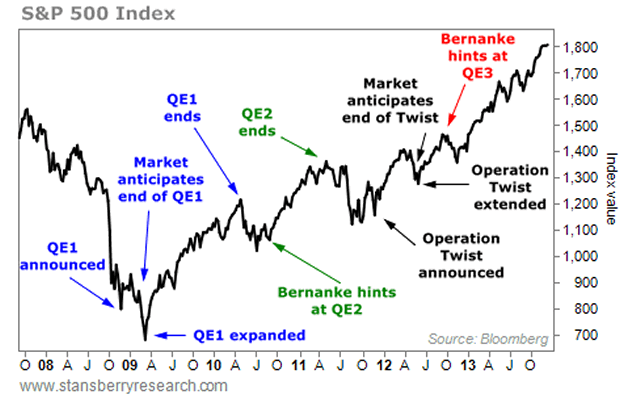 As you can see in the graph above, since 2009 every time the stock market swooned, the Fed
came in with another round of QE to bolster the market. But now that QE has ended, the stock
market is going to have to go it alone. Wall Street is single again, on the prowl for another
partner. But I don’t think it can ever find a partner as good as the Fed. Frank Sinatra’s ex-wife
never remarried. Asked why she said “Are you kidding? Who’s ever gonna’ replace Frank
Sinatra?” The stock market is now in the same bind.
The Government, through fiscal policy, can flood the economy with money, as it did with the
Covid checks and PPP loans. Maybe some of this largess will seep into the stock market. But
the Government also needs the Fed to buy the debt it issues from the Treasury to make it all
happen. The Government needs the same Fed partner as the stock market. But she’s not
available. QE is gone.

What went wrong? What went wrong is the onset of inflation. The Fed expanded its Balance
Sheet by $8 tril in order to facilitate the Treasury in expanding the US government’s debt to $30
tril. The Money Supply and Deficit both soared with all the QE money created out of thin air by
the Federal Reserve. The Fed bought trillions in US government bonds from the Treasury to
suppress interest rates allowing money to flow into the economy, which directly benefited the
stock market. As you can see below, the increase in the Money Supply (M2) directly aided the
stock market.

But flooding the economy with money has other, less positive, consequences too. It makes each
successive printed dollar worth less. The more dollars in circulation, the less each dollar is
worth. The more dollars in circulation, the less purchasing power the average American has.
Everything costs more. With a 10% inflation rate, the dollar becomes worth 90 cents. With a
20% inflation rate, the dollar is worth 80 cents, and so on.
So the Fed made a decision. Sacrifice QE (and the stock market?) to curtail inflation. So now
after the QE break-up, Wall Street has a broken heart. It will never find a partner as good as the
Federal Reserve’s QE program.

The following posts are quotes and paraphrases:

Satyajit Das:    The ECB and European banks are in a “doom loop.” the ECB loans money to the European Banks at near zero interest rate to buy their country bonds to drive down rates so their respective countries can issue even more debt at lower interest rate payments. They then each guarantee each other. (Das is a renowned author and world expert on derivatives).

Fred Hickey:   Wall Street is in a pickle. The stock indexes, in terms of Price/ Sales are more overvalued than ever before. It now requires perfect execution by the Federal Reserve, which has been been wrong on every single macro forecast since the 2008 financial bubble (GDP, housing, subprime,  etc) to keep the markets inflated. (Hickey is only “Barron’s” Roundtable participant to have correctly called every bull and bear market cycle since 1992).

Frederick Sheehan:    Business Week, October 19, 1929:  “There is…reassurance that, in the fact that, should business show any further signs of fatigue, the banking system is in a good position now to administer any needed tonic from its excellent Reserve system.” (Sheehan is a highly esteemed financial author).

Eric Sprott:  “All this money printing is designed to help the U.S. address its massive obligations, which include its current debts and off-balance sheet obligations of around 80 trillion dollars. Their annual revenues are only around 2.8 trillion dollars and their expenditures are 3.5 trillion. Everyone knows there’s no way they can afford to keep going and cover their obligations. This leaves money printing to cover the gap”. (Sprott is a celebrated money manager known for his timely calls in precious metals).

James Walker: When people start asking questions about the efficacy of the current monetary policy they will realize the Central Bankers are not to be trusted. If they are not to be trusted after printing trillions of dollars, there will be a movement into harder assets.  This has already happened in India and China the last two years. At that point  we will be lucky in the West if there is any physical gold left when the time comes. (Walker is the eminent head of the highly successful Asianomics).

Russell Napier:  “Given deteriorating economic fundamentals, deflation is likely to occur in the United States. Once deflation sets in and once investors realize that QE (Quantitative Easing by the Federal Reserve) does nothing to help the real economy, the S&P 500 Index will likely collapse (at least 50% down, although probably not all in one year.  (Napier, an esteemed  independent strategist and co-founder of ERIC,  correctly predicted the sub-prime crash in 2008).

Quoting Alan Greenspan  in “Gold and Economic Freedom” : “In the absence of the gold standard, there is no way to protect savings from confiscation through inflation.”